Winterkill in Nebraska: What Is It & How Can You Avoid It? | Yard Boss

Although this past winter in Nebraska has been forgiving to our free time with less shoveling needed, you may be starting to see that it's damaged your lawn. If you're noticing large cracks in the soil and your lawn, this is a red flag that your soil is severely dehydrated and may be suffering from winterkill, a term used to refer to turf death caused by exposure to brutally cold winds. The lack of snow cover during this winter has left your grass particularly vulnerable to winterkill with no blanket of snow to buffer the winds. To help avoid the damage of winterkill, it's essential to rehydrate your lawn with some quality watering time now rather than waiting until you can use your sprinkler system again around May.

Winterkill can do massive damage to your lawn. It is a term used to describe turf death caused by exposure to brutally cold winds, which then leads to severely dehydrated and unhealthy grass that eventually dies. The first signs of winterkill are often seen in trees or elevated areas of turf that have more exposure to wind. Particularly in eastern Nebraska, where we're known for our high and persistent winds, we need to be vigilant about the threat of winterkill in our landscape.

High winds combined with cold temperatures can pull the moisture out of soil as quickly as a hot day in July!

The lack of snowfall this winter increased the chances of winterkill.

In a typical winter, our lawns have some snow cover that protects the grass from wind exposure. This snow blanket also serves to hold in moisture, and as it melts, will replenish moisture in the soil. However, with the lack of snowfall we received this winter, our grass didn't have much of a buffer to shield against the harsh, cold winds that cause winterkill. With the crown or "brain" of the plant exposed, the grass took a beating from the winds and had no moisture in the soil to recover. That's when you start to see the cracks in your soil that indicate dryness and eventually cause turf death.

What can I do to help avoid winterkill damage and keep my lawn healthy?

If you're seeing signs of winterkill in your lawn and landscape, don't panic! All is not lost if you act quickly. What your plants need is simple: moisture. In our area, we generally wait to turn on our sprinklers until around May, and you should still follow that rule of thumb. However, in this urgent situation, it's OK to break out the hose and sprinkler and water the old-fashioned way! Turn it on for a while as though you're watering in summer and move it throughout your entire lawn, nourishing the grass and soil with the hydration they're desperately in need of. Do this once a week until your lawn breaks dormancy, and it'll help keep the threat of winterkill at bay and avoid lasting damage so that your lawn can emerge healthy in spring!

Once you're done watering, be sure to unhook the hose from the spigot so that it doesn't freeze overnight.

Does your lawn need a boost after its bout with winterkill? Call us today to enroll in our fertilization and weed control program!

Getting moisture back into your lawn is the most important first step in the road to recovery from winterkill, but for an extra boost, look no further than the fertilization and weed control program we offer at Yard Boss. We'll not only nourish your lawn with the nutrients it needs year-round for healthy growth and root development, but we'll also lay down pre-emergent and post-emergent treatments for comprehensive weed control coverage. This program was developed specifically to bolster lawns in Nebraska areas such as Lincoln, Hickman, Seward, Crete, and nearby cities. If you're in the area and ready to see your lawn thrive, call (402) 418-2233 today to enroll in our program!

Thanks for your feedback! Your comments have been successfully submitted! Please note, all comments require admin approval prior to display.

There is a problem with your comment, please see below and try again.

There have not been any comments left on this post. 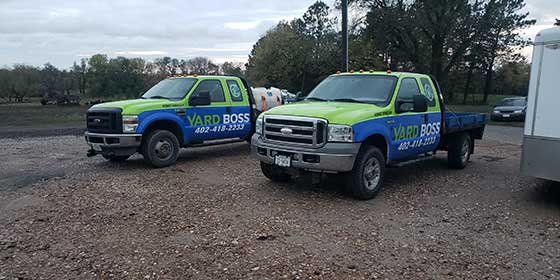